Man, I really should proofread these before I hit “publish post.”

I got my essay back. All you optimists were right. How I hate you so. (Well, not really. I got a 45/50, which is one point better than my last essay, and supposedly “really good” for this point in the year. It wasn’t as good as I thought I would get though, so I think I’m still right about my feeling! Take that, you silly optimists.)

Seems like my newest demographic is middle-aged mom. Not that this is necessarily bad, but how in the hell did this happen? That’s a pretty big demographic switch — teenage gamer to middle-aged mom? I consulted with Dave. You might remember him as a big gay robot — and the guy I have the most pointless arguments with ever. One time we argued about whether or not certain games (like Ninja Gaiden) were RPGs. Man. No wonder we don’t get the womens.

He thinks it’s because these middle-aged moms are looking to get insights on their own kids from my blog. Lemme tell you straight (would I do you dirty?) — if that’s the case, you’re looking in the wrong place. I’m quite different from your kid, I suspect. For one, I never was parented much. I had my brother, mostly, and then the internet. Not that I’m complaining. I’d do it all over again if given the option. My mom’s real… uh… great. Yeah. That’s the best way to describe her.

And my dad? He’s real… around. Yeah. That’s the ticket.

I’m almost as good at lying as my brother was, in his late-night drunken prime!

Well, maybe not quite so good.

I had this weird mental-breakdown thing at work (on Wednesday, I think). I kept having all these weird thoughts that I couldn’t place — and not the awesome kind, either. Even my hallucinations suck. I think I was hallucinating about video games. Go figure. Anyway. I was also thinking about all the homework I need to get done this weekend. And all the crap that I had to do on Wednesday to get some stuff turned in. (I finished three or four AP Stats assignments between my first two classes, and finished an APUSH essay in under 40 minutes during lunch.)

Add some heat to that mix (I was working in the kitchen, doing the dishes) and you’ve got one violently ill John. I step outside to get a drink. When I “come to,” I can’t really remember much of what I was thinking about, and I felt about ten times dumber. (Which still makes me ten times smarter than you. Zing! No, I’m humble. Really.) Plus I kinda started to sob at weaker moments for the rest of my shift.

Then what do I do? Probably something pretty stupid. I mean, what else would you expect? I’m not exactly a paragon of brilliance here.

I get home and try to talk to one of my friends. None are around. So I write a weird message to this girl in my French class. If I hadn’t creeped her out before, she’s definitely creeped out now. (Who cares about my mental breakdowns? Psh, not girls in my French class. That’s for certain.)

In slightly more hilarious news, I was playing Guild Wars today. No, that’s not what was hilarious… you people are so impatient. Anyway. There was some guy dancing amongst a bunch of female characters (who I reckon were actually men in real life, for the most part), trying to get them to dance/trying to mack on them. I walk over with my big burly warrior, and start dancing. (If you don’t know the male Guild Wars dance, it involves lots of crotch thrusting and spinning.)

Some other big, burly male warrior comes over and starts dancing, too. I take off my armor. He takes off his. Insert about 10 minutes of chasing this poor sucker around and half-nakedly crotch thrusting him until he finally leaves town. Good times. Good times indeed. Here’s a picture: 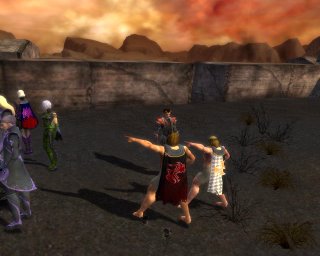 Oh yeah, and there’s always this.