Not my homework, that’s for sure.

Just for you people out there who don’t know what a typical Sunday night load is like, here we go:

I’ll get started on it. Hopefully before midnight. (It’s 10 PM right now.) I decided that a wiser investment of my time this 3-day weekend would be to play through Resident Evil 4. It was, in fact, a pretty wise investment of my time. There’s not much else better in gaming than being surrounded by a bunch of blood thirsty crazed-villagers with axes and pitchforks, armed with only your trusty shotgun (and maybe some hand grenades). Aim high and fire!

I mentioned on my fake blog that politics in my town make me cry. I guess I’ll go ahead and elaborate here.

Bellingham is full of what I like to call “bandwagon liberals.” These people have little to no clue about what’s actually going on in politics (or the world, or anything). However, because everyone in Bellingham is a “pot-smoking, tree-huggin, hemp-shawl wearing, sandal-donning hippy queer” (my brother’s badly paraphrased words from last night’s phone conversation), being a liberal is the “cool” thing to do. These people have no idea about even the basic arguments on the Republican/Conservative side of things, either. They’re liberal, just cuz. They hate Bush, just cuz. They’d vote Kerry, just cuz. (That’s their only reason for anything, seriously.)

Not to say I’m not liberal. I took a little political test and this is where I fell: 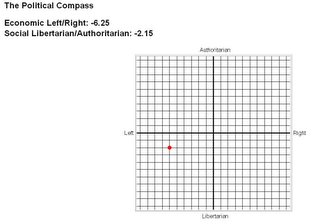 As you can see, I’m not exactly not liberal. But I’m not bandwagon, either! Hell, most people at my school confuse me for a Republican. This is due to my tendency to take the Republican side of things in classroom debates (simply because there’s SO MANY LIBERALS). I usually end up “winning” (if you can “win” in a class debate) too. The people who are smart enough to actually ask me about myself and my political flavoring learn that I just like to see both sides of an argument before committing myself to a position.

Isn’t that what everyone should do? Whatever happened to, oh, I dunno, weighing the options before you make a decision? I guess nobody cares to do that these days. God damn it, they know what they’re talking about, and they’re right, just because, and if you disagree with them, why you must be shit-eating, stupid Republican mother fucker! Am I right? I’m so right.

Bellingham is also full of a lot of so-called Christians. I say so-called because I was born and raised Christian (currently agnostic, go read my post about religion if you haven’t already) so I know a thing or two about Christianity. When I slept as a kid, I had the New Testament read to me via a tape deck. I used to know the New Testament inside and out. Christ and me, we were like this. (You can’t see me but I’m crossing my fingers.)

So I like to pester the “Christians” round these parts. A few of them read my post about Agnosticism and tried to disagree with me on a few points. Most notably, on the point that wanting proof of God’s existence shows a lack of faith. I preached to some girl about faith, it was pretty great. Of course, I could be totally and completely wrong, but that’s for you to judge!

[21:44] [NAME REMOVED]: sometimes though
[21:44][NAME REMOVED]: it would make things easier if you did have proof
[21:45] DaMan91088: That contradicts the very notion of faith. Now, I’m not ignorant in all things Christian… born into a Christian family, was raised Christian, and at one point knew the New Testament like the back of my hand.
[21:45] DaMan91088: As I recall (I may be a bit rusty) both God and Jesus call for unquestionable faith. Hence why Jesus would make people drop all their worldly possessions, give up their whole lives, in order to follow him
[21:45] DaMan91088: (Demonstrate their belief)
[21:46] DaMan91088: Likewise God often preferred for people to believe in him rather than directly show off his power, and it can be interpreted that he’s been less active in the world because he’d rather people believe in him than directly interfere in order to command respect.
[21:46] DaMan91088: Faith is the basic tenant of salvation, as I recall.
[21:46] DaMan91088: You have faith in God, you ask for forgiveness and you receive your salvation, basically.
[21:47] DaMan91088: Calling for proof or questioning if God actually exists (such concerns as “if God exists, why do wars happen, etc”) can be perceived as a lack of faith and certainly can be the first steps towards becoming unfaithful.
[21:48] DaMan91088: (PS feel free to correct me if I’m wrong about Bible passages.)
[21:50] DaMan91088: And as I remember it, I think there was something in Revelations somewhere about how God will test everyone’s faith before the end times.
[21:50] DaMan91088: Through lots of catastrophes and such.

There’s also lots of “feminists.” But I better not get started on them. I’m going to be doing a protest project on them, so I’ll save the feminism blog (which I’ve had mulling ’round in my McThinker for quite a while) for after that project, just so it’ll be extra juicy for you guys.

And in completely miscellaneous news, I have this really great idea for telling a story. At least, I think it’s a great idea. I’d rather not post about it for all the internet to see, so if you’re interested, fire me a quick email or AIM message or something.

Here’s something to read if you want to read something (I should stop the sentence here for comedy, but I’ll continue) better than the garbage I write: http://www.rhapsodyingreen.com/id73.html