So as I’ve alluded to previously, I think the two-party political system we’ve got here in America sucks. There’s a litany of problems associated with it. I can’t begin to rank which problem is worse than the other, so I’ll just list and describe them in no particular order:

So what do we do? Well, I thought about this a great deal either last year or two years ago (it’s tough for my old brain to remember). I haven’t thought about it so much lately, so bear with me. Also, this idea is (of course) crazy and you’re going to lose any respect you once had for me once you hear it.

I advocate eliminating parties as we know them. Instead, we go through a series of local, regional, state-wide, larger regional and finally national elections to decide Presidents. Essentially, a candidate will campaign locally, in a city. Accepting political donations wouldn’t be kosher. If s/he wins the local election, s/he goes on to the regional election. The regionals could just be by county. The top 4 vote takers in the regional could go on to state. Debates would be held at colleges and would be televised at a state-wide level. The money required for these debates would be provided by the federal government — I don’t think it’s unreasonable to be taxed a bit to ensure that corruption is swept clean from the government?

Once a state has elected its candidate, then a couple of states will be divvied up into regions where votes are again taken for a national candidate. Finally, national elections would be held. Again, all debating would take place at college campuses. This would be the primary way of getting to know the candidates — through debate, not through soapbox speeches where they can say whatever they want to and not be questioned.

Anywho, that was my crazy idea now made crazier because I don’t remember the particulars very well. I never thought of how candidates for the House of Reps or Senate would work either.

So, lambast away! (Thanks to Dan for the picture below) 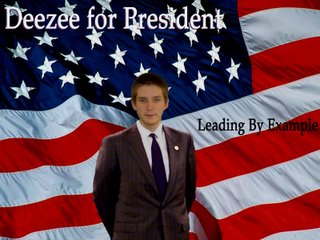